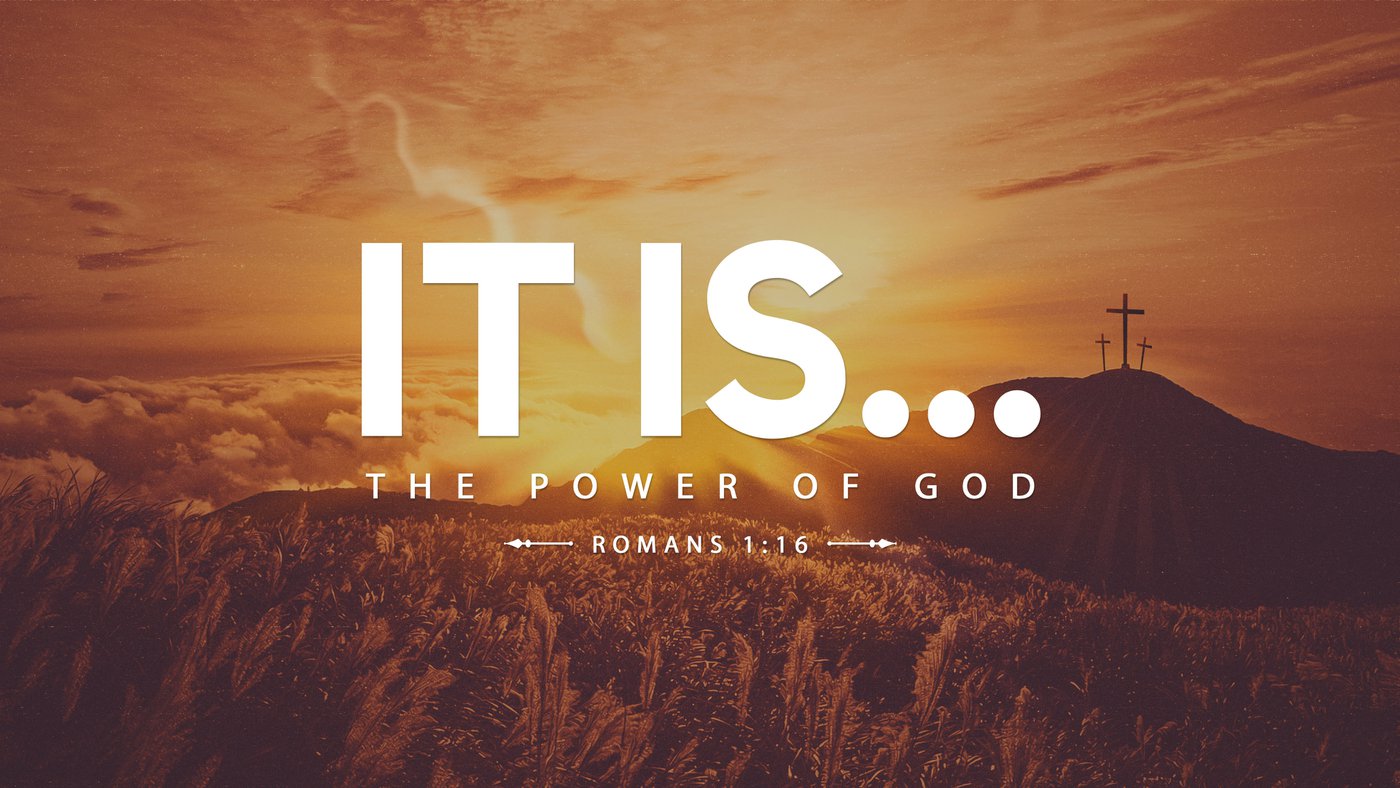 This is part 2 of the It Is...The Power Of God Sermon Series.

For a child of God Easter, or Resurrection, Sunday, is an incredibly special day. One that we should celebrate and not be ashamed of. And that was exactly what Paul was saying in Romans 1:16. When we think about the gospel, it is all about the power of God and the ability that He has to set us free from the penalty, from the prison, from the power, and, one day, from the very presence of sin.

Summary: Since before the world was spoken into existence and before mankind was formed from the dust of the ground, the plan of God was to provide a way of salvation - a way for us to be brought back into a right relationship with God. And that is exactly why Jesus came and what He accomplish through His death, burial, and resurrection.

(Romans 1:16): "For I am not ashamed of the gospel of Christ: for it is the power of God unto salvation to every one that believeth; to the Jew first, and also to the Greek."

Guide for this study:

(A) In verse 4, we find that The PLAN of God is powerful – Christ was SENT by the power of God

(B) In verse 16, we find that The PROVISION of God is powerful – Christ SHOWED the power of God

(C) In verse 20, we find that The PROMISE of God is powerful – Christ was SPOKE of the power of God

The word gospel, in verse 16, when the book of Romans was written was a word that was seldom used because it carried with it the idea of news that was considered to be so wonderful, so incredible, so awesome, that it could hardly be believed. It that was nearly too good to be true. And really, up until the New Testament, nothing justified its use. Oh, but when Jesus came, everything changed.

Last week, we highlighted verse 4 and we found that the PLAN of God is powerful.

A) Paul identified Jesus as the PROMISED One (Romans 1:2)

B) Paul identifies Jesus as the PERFECT One (Romans 1:3-4)

C) Paul identifies Jesus as the POWERFUL One (Romans 1:4)

Titus 2:11 says, “For the grace of God that bringeth salvation hath appeared to all men…”

Titus 2:13-14 says, “…our Saviour Jesus Christ…gave himself for us, that he might redeem us from all iniquity…”

Here in verse 16, Paul identifies the gospel as the power of God, but what is it that makes the gospel so powerful.

The gospel of Christ is powerful because it COMPLETED GOD’S PLAN AND GOD’S PROMISES. (“…for it is the power of God…”)

The gospel of Christ is powerful because of the SCOPE OF ITS REACH.  (“…to every one that believeth…”)

Throughout His writings, the Apostle Paul

1 Corinthians 1:18 says, “For the preaching of the cross is to them that perish foolishness; but unto us which are saved it is the power of God.”

1 Corinthians 2:5 says, “That your faith should not stand in the wisdom of men, but in the power of God.”

In Colossians 1:13-14, the Bible says that Christ “…hath delivered us from the power of darkness, and hath translated us into the kingdom of his dear Son: in whom we have redemption through his blood, even the forgiveness of sins.”

1 - In the gospel of Christ, we find that the WORK of God was finished

John 17:4 says, “I have glorified thee on the earth: I have finished the work which thou gavest me to do.”

A) He SHOWED the LOVE of God PASSIONATELY

John 17:6 says, “I have manifested thy name unto the men which thou gavest me out of the world…”

Romans 5:8 says, “But God commendeth his love toward us, in that, while we were yet sinners, Christ died for us.”

1 John 3:1 says, “Behold, what manner of love the Father hath bestowed upon us, that we should be called the sons of God: therefore the world knoweth us not, because it knew him not.”

John 3:16 says, “For God so loved the world, that he gave his only begotten Son, that whosoever believeth in him should not perish, but have everlasting life.”

B) He SPOKE the words of LIFE

John 17:8 says, “For I have given unto them the words which thou gavest me; and they have received them, and have known surely that I came out from thee, and they have believed that thou didst send me.”

Luke 4:4 says, “And Jesus answered him, saying, It is written, That man shall not live by bread alone, but by every word of God.”

C) He SATISFIED the LAW of God PERFECTLY

Matthew 5:17-18 says, “Think not that I am come to destroy the law, or the prophets: I am not come to destroy, but to fulfil. For verily I say unto you, Till heaven and earth pass, one jot or one tittle shall in no wise pass from the law, till all be fulfilled.”

D)  He SOUGHT the LOST

John 8:12 says, “Then spake Jesus again unto them, saying, I am the light of the world: he that followeth me shall not walk in darkness, but shall have the light of life.”

E) He SACRIFICED His LIFE for the PLAN of God

Hebrews 10:12-14 says, “But this man, after he had offered one sacrifice for sins for ever, sat down on the right hand of God; from henceforth expecting till his enemies be made his footstool. For by one offering he hath perfected for ever them that are sanctified.”

John 19:30 says, “When Jesus therefore had received the vinegar, he said, It is finished: and he bowed his head, and gave up the ghost.”

2 - The WILL of God was finished

John 19:30 says, “When Jesus therefore had received the vinegar, he said, It is finished: and he bowed his head, and gave up the ghost.”

The phrase It is finished carries with it the idea that it is finished today and that it will continue to be finished forever.

2 Peter 3:9 says, “The Lord is not slack concerning his promise, as some men count slackness; but is longsuffering to us-ward, not willing that any should perish, but that all should come to repentance.”

There Are Moments Where We Have To Act. This Is One Of Those Times.

The Joy Of Easter Is Found In A Risen Saviour!