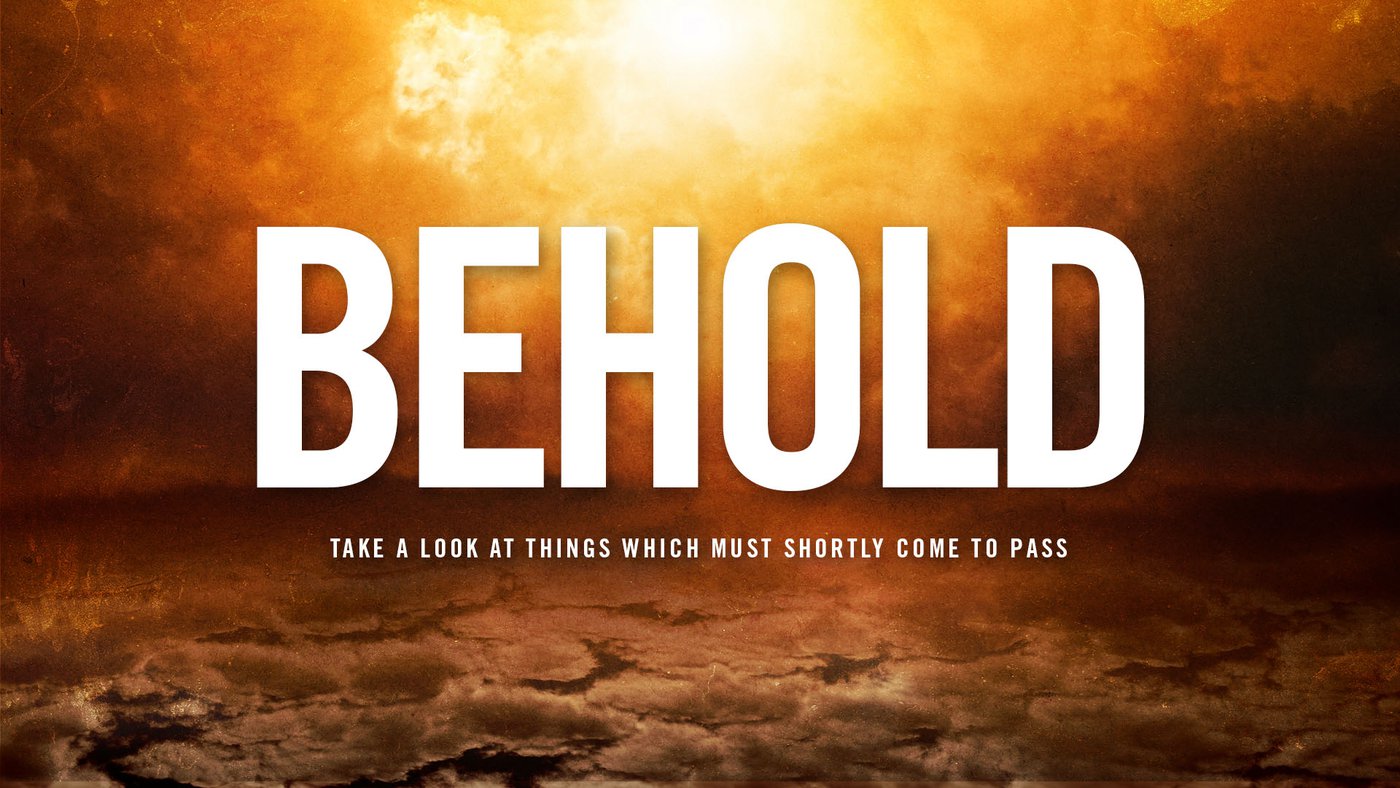 Behold - The White Horse And Its Rider (Part 3)

This is part 59 of the Behold Sermon Series.

We want to see how the story is going to end so that we know what to anticipate as we make our way through the story. Life is no different. We all have a desire to know what's going to happen next so that we can be better prepared for whatever it may be. While God has not explained everything that will take place to us, He has pulled back the curtain of tomorrow and He invites to take a look and to make proper preparations in our heart and in our life for what will come to pass shortly.

Summary: We want to see how the story is going to end so that we know what to anticipate as we make our way through the story. Life is no different. We all have a desire to know what's going to happen next so that we can be better prepared for whatever it may be. While God has not explained everything that will take place to us, He has pulled back the curtain of tomorrow and He invites to take a look and to make proper preparations in our heart and in our life for what will come to pass shortly.

(Revelation 19:11): "And I saw heaven opened, and behold a white horse; and he that sat upon him was called Faithful and True, and in righteousness he doth judge and make war. ."

When we come to this section of Revelation chapter 19, the wedding and the marriage supper of the Lamb in Heaven have already taken place, and it is now time for Jesus to once again step back into His Creation and claim what is rightfully His – the earth.

Last week, we considered the first five words of verse 22 (“And I saw heaven opened…”), and we found that while that is a short statement, there will be a lot taking place up to and at that very moment:

1) The COMING of the King

A) The PREPARATION for the king

When a dignitary or a person of royalty goes anywhere, there is a lot of preparation that takes place prior to them showing up. The same is true when Jesus, the King of Kings and Lord of Lords returns. We found that this preparation is three-fold:

(1) The preparation of the EARTH

That’s what the entire book of Revelation is about – the earth being prepared to receive her King.

(2) The preparation of the HEAVENS (space)

This is a collective statement that includes our sky, space, and the universe as a whole. We found that when Jesus comes in Revelation chapter 19:

The sun and moon, though still there, will not shine,

The stars are going to fall from Heaven which means that they no longer shine, and

The planets and meteors and other space related items throughout the universe are going to be shaken (like something that is resting on top of rippling waters).

(3) The preparation of those in HEAVEN

We’ll talk about this a little more in just a moment, but when Jesus comes in Revelation chapter 19, He isn’t coming alone. As such, there is some preparation that will be done prior to this event.

B) The POMP of the king

Prior to Jesus being seen, there are a few things that will take place:

The gate of Heaven is going to open,

A trumpet will be blown, and it will heard throughout heaven and all around the universe.

C) The PRESENTATION of the king

It is then that the sign of the seen will literally be seen as rides through the gate of heaven and His light fills the universe. We find here that Jesus will be presented to the world:

Not as the LAMB, but as the LION,

Not as the REDEEMER, but as the RULER,

Not as the SAVIOUR , but as the SOVEREIGN.

(a) He will be seen as FAITHFUL AND TRUE

(b) He will be seen as FIGHTING IN RIGHTEOUSNESS

(B) He is DISTINGUISHED by His ABILITY (Revelation 19:12a) ability

(a) He is distinguished by His DISCERNMENT

(b) He is distinguished by His DELIVERANCES

1) The COMING of the King

A) The PREPARATION for the king

B) The POMP of the king

C) The PRESENTATION of the king

Revelation 19:11 says, “And I saw heaven opened, and behold a white horse…”

(A) The white horse speaks of the PROMISE OF PEACE

1 Thessalonians 5:3, that “…they shall say, Peace and safety; then sudden destruction cometh upon them…”

Romans 16:20 says, “And the God of peace shall bruise Satan under your feet shortly. The grace of our Lord Jesus Christ be with you. Amen.”

Colossians 1:20 says, “And, having made peace through the blood of his cross, by him to reconcile all things unto himself; by him, I say, whether they be things in earth, or things in heaven.”

2 Thessalonians 3:16 says, “Now the Lord of peace himself give you peace always by all means. The Lord be with you all.”

Hebrews 7:2 by affiliation refers to Jesus as the “…King of Peace.”

(B) The white horse speaks of PURITY and RIGHTEOUSNESS

Deuteronomy 32:4 says, “He is the Rock, his work is perfect: for all his ways are judgment: a God of truth and without iniquity, just and right is he.”

2 Kings 2:11 says, “And it came to pass, as they still went on, and talked, that, behold, there appeared a chariot of fire, and horses of fire, and parted them both asunder; and Elijah went up by a whirlwind into heaven.”

2 Kings 6:17 says, “And Elisha prayed, and said, LORD, I pray thee, open his eyes, that he may see. And the LORD opened the eyes of the young man; and he saw: and, behold, the mountain was full of horses and chariots of fire round about Elisha.”

Revelation 19:13 says, “And he was clothed with a vesture dipped in blood: and his name is called The Word of God.”

Isaiah 63:1-3 says, “Who is this that cometh from Edom, with dyed garments from Bozrah? this that is glorious in his apparel, travelling in the greatness of his strength? I that speak in righteousness, mighty to save. Wherefore art thou red in thine apparel, and thy garments like him that treadeth in the winefat? I have trodden the winepress alone; and of the people there was none with me: for I will tread them in mine anger, and trample them in my fury; and their blood shall be sprinkled upon my garments, and I will stain all my raiment.”

2 Corinthians 5:21 says, “For he hath made him to be sin for us, who knew no sin; that we might be made the righteousness of God in him.”

Hebrews 9:2-14 says, “For there was a tabernacle made; the first, wherein was the candlestick, and the table, and the shewbread; which is called the sanctuary. And after the second veil, the tabernacle which is called the Holiest of all; Which had the golden censer, and the ark of the covenant overlaid round about with gold, wherein was the golden pot that had manna, and Aaron's rod that budded, and the tables of the covenant; And over it the cherubims of glory shadowing the mercyseat; of which we cannot now speak particularly. Now when these things were thus ordained, the priests went always into the first tabernacle, accomplishing the service of God. But into the second went the high priest alone once every year, not without blood, which he offered for himself, and for the errors of the people: The Holy Ghost this signifying, that the way into the holiest of all was not yet made manifest, while as the first tabernacle was yet standing: Which was a figure for the time then present, in which were offered both gifts and sacrifices, that could not make him that did the service perfect, as pertaining to the conscience; Which stood only in meats and drinks, and divers washings, and carnal ordinances, imposed on them until the time of reformation. But Christ being come an high priest of good things to come, by a greater and more perfect tabernacle, not made with hands, that is to say, not of this building; Neither by the blood of goats and calves, but by his own blood he entered in once into the holy place, having obtained eternal redemption for us. For if the blood of bulls and of goats, and the ashes of an heifer sprinkling the unclean, sanctifieth to the purifying of the flesh: How much more shall the blood of Christ, who through the eternal Spirit offered himself without spot to God, purge your conscience from dead works to serve the living God?”

Romans 3:25 says, “Whom God hath set forth to be a propitiation through faith in his blood, to declare his righteousness for the remission of sins that are past, through the forbearance of God.”

1 John 2:2 says, “And he is the propitiation for our sins: and not for ours only, but also for the sins of the whole world.”

1 John 4:10 says, “Herein is love, not that we loved God, but that he loved us, and sent his Son to be the propitiation for our sins.”

Revelation 5:6 says, “And I beheld, and, lo, in the midst of the throne and of the four beasts, and in the midst of the elders, stood a Lamb as it had been slain, having seven horns and seven eyes, which are the seven Spirits of God sent forth into all the earth.”

Revelation 5:9 says, “And they sung a new song, saying, Thou art worthy to take the book, and to open the seals thereof: for thou wast slain, and hast redeemed us to God by thy blood out of every kindred, and tongue, and people, and nation.”

Revelation 5:12 says, “Saying with a loud voice, Worthy is the Lamb that was slain to receive power, and riches, and wisdom, and strength, and honour, and glory, and blessing.”

Revelation 13:8 says, “And all that dwell upon the earth shall worship him, whose names are not written in the book of life of the Lamb slain from the foundation of the world.”